The operculum is a hard, plate-like, bony flap that covers the gills of a bony fish (superclass: Osteichthyes).  It protects the gills and also serves a role respiration.  Fish can acquire dissolved oxygen through pumping water over their gills by opening and closing their jaws and opercula.  The water is flushed from the fish’s mouth over the gills where blood inside capillaries is able to absorb the dissolved oxygen and out the body behind the opercula.

The posterior margin of the operculum is generally used in morphometrics to divide the head and body.  The operculum shape varies greatly from species to species.  Sunfish (family: Centrarchidae) are known to have particularly prominent opercula and a few species have common names include a reference to their “ear,” or operculum. 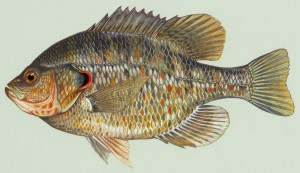 The Redear Sunfish is known for its conspicuous operculum