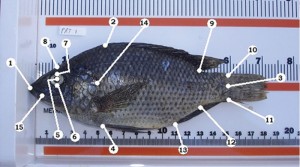 Meristic and morphometric traits are used to identify fish

A meristic is a countable trait, such as number of gill rakers or number of dorsal fin spines.  Morphometrics examines the size and shape using a measurable trait, such as standard length or wet weight, which can be gauged as a length, mass, angle or ratio of other measurements.  Meristic traits and morphometrics are often used to classify taxa, sometimes down to the species level or sub-species level.  In dichotomous keys, these counts and measurements can help identify a particular species of fish.  Prior to modern genetic techniques, meristics and morphometrics were the principal foundation for fish taxonomy and systematics.  Even today, meristics and morphometrics are commonly used for species identification and ground-truthing genetic analyses with phenotypic traits.