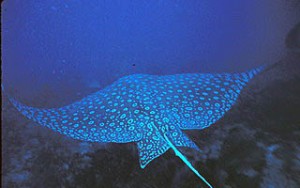 Spotted Eagle Rays are a member of the cartilaginous subclass Elasmobranchii along with other rays, sharks, and sawfishes (NOAA).

Elasmobranchs, including sharks, rays, and sawfishes, belong to the taxonomic subclass of cartilaginous fish Elasmobranchii.  Like most chondrichthyes, they have exposed gills, no swim bladder, internal fertilization, and placoid denticles.  They differ from the other subclass, chimaera (subclass: Holocephali), in that they have rigid dorsal fins, placoid denticles cover most of their bodies, and they usually have spiracles (modified gill slits directly behind the eye).